If you’ve been paying attention you may have seen more bicycles on the road and on The Loop.

Bike sales in Tucson and around the country have surged in the last couple of months.

“As soon as the gyms closed down (a couple of months ago because of the Coronavirus) things went nuts … in a good way,” said Bruce Rhoades of Broadway Bikes. “It’s something I had never seen before and I’ve been selling bikes for 37 years.”

Steve Wetmore of Sabino Cycles said sales in Tucson have been anywhere from 25 to 50 percent higher over the last few months. 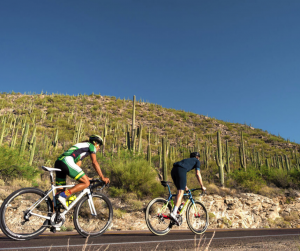 “Everyone who I have spoken with in town and out of town has said they have done better than anticipated,” Wetmore said. “We’re doing quite well.”

It seemed over the last three months or so cycling has been the go-to recreational activity of choice. It’s great for social distancing and, of course, exercise in getting out of the house.

Rhoades said the more inexpensive bikes “disappeared overnight” and “nationwide those were gone.”

The sales in southern Arizona are consistent with sales throughout the United States. Some cities have reported sales up 120 percent.

“As the pandemic continues bikes at $1,200 are now disappearing.”

Rhoades said it’s gotten to the point where keeping bikes in stock is an issue “but that’s the case with everyone else. Most of the companies that we carry are sold out of stuff so we can’t get anything from them.”

Wetmore and Ben Chandler of Ben’s Bikes echoed that.

“Now the pipeline (from manufactures) is dry,” said Wetmore, adding that his story normally carries 120 bikes but is now down to about 50.

If there are more bikes that means maintenance has been up as well. Rhoades said he is scheduled for the next month.

Chandler said his shop is very busy and has a two-week wait time on tune-ups and repairs.

Wetmore said part of that is people just haven’t bought bikes, but they’ve searched their garages for the older one and hopped on.

“Their bringing them in to get serviced to go on a ride,” Wetmore said.

And it’s clear to Wetmore they are riding. He lives in the far eastside and he sees a number of cyclists every day. And he sees them on The Loop.

‘That tells me people are still getting out quite a bit,” he said, saying the heat hasn’t played a factor yet.

For Chandler it’s a Catch-22. He sees more cyclists and hopes the surge in sales “has created a lifestyle and not just a habit.”

He said if the cycling business can convert 30 percent of the new cyclists to remain cyclists, “we’d be in an amazing situation for cyclists in Tucson.”

He added he started his business to help put people on bikes, but because of the incredible sales “I have no more bikes.”