Graham Donaldson might be considered a one-man gang. Or better yet a one-man Cancer buster.

He’ll be in El Tour de Tucson in three weeks riding for The Tour 21 Cure Leukaemia, a London-based charity. It’ll be one of the more than 50 non-profit partners involved in El Tour this season. 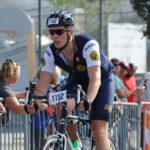 And, oh yes, the organization is looking for cyclists to help its cause. Donaldson, who is based in Tucson and is a cyclist, is committed to raising $40,000 – give or take, he says for the event.

He’s participating in El Tour to help bring awareness – and money – to the event overseas, one that will take place a week before the Tour de France.

Locally, he’s hoping to get cyclists to help him raise money.

“I’m not sure I’ll be quite that fast this year but I’m going to try,” he said, admitting he hasn’t trained as much as he has in the past. “I heard about (El Tour) from coworkers at Raytheon before I moved to Tucson, and from fellow riders from the Sunday group at Oro Valley Bike. My longest ride before 2006 was 70 miles around Lake Tahoe, but I knew I’d have to go for the full 106 that first year.”

Great to have him back for a fourth year. This time he’ll be riding for Tour 21 Cure Leukemia. 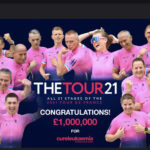 For The Tour 21 Challenge next year, he’ll be the only American on the team of about 25 cyclists.

“I am joining former England and Crystal Palace footballer and leukemia survivor, Geoff Thomas, and other teammates to cycle the full Tour de France route one week ahead of the professionals and raise a combined $1.4 million for UK charity Cure Leukaemia,” he said.

“The Tour de France is one of the biggest challenges in sports, and the fundraising for Cure Leukaemia is one of the most important personal commitments I’ve ever made: funding clinical trials and the basic science of medicinal research pays incredible dividends, both to the patients directly affected and to the world at large. Katelyn, my girlfriend of five years, lost her mother to melanoma after she was removed from a clinical trial that was saving her life; Geoff Thomas, the reason we’re taking on this challenge, beat leukemia thanks to an experimental treatment way back in 2003; and the only reason they were able to run the 2021 edition of The Tour 21 challenge and we’ll be able to do it again in 2022 is thanks to the medical research and clinical trials that rolled out vaccines for COVID-19 so quickly.”

If you’d like to ride for The Tour 21 Cure Leukaemia visit Cure Leukaemia (pledgereg.com) And to learn more about the ride next summer visit www.thetour21.co.uk